Santa's gone, folks and he left some mighty nice things.
For one thing, Santa sure knows how to shop off of my amazon.com wishlist.
Smart guy!
Because then he knows things are always just right if you buy me what I want. And if you don't, I'll just buy it for myself, but a surprise is always nice.
I received my first, ever Vera Bradley bag - it's the train case - and unlike DN2, I did think I would have to wait until I was 75 to get my first piece. (For the record, I'm not a huge Vera Bradley fan - those cloth bags would not hold what I carry in my bag everyday, which is usually one to two books, knitting, numberous receipts, at least four tubes of lipstick and other assorted accoutrements.)
So I was pleased with my gifts, and my children were too.
Here's a picture of my gamers in action: 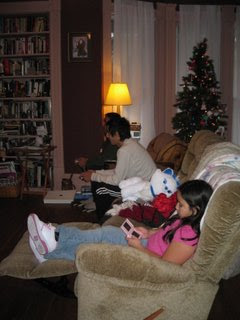 Now sometimes things seem magnified and perhaps a bit strange after you've been drinking. And let me say for the record that on Monday night I hadn't imbibed so much champagne that my judgement was impaired, but as I sat there drinking I heard my son's voice come from the television set. It was totally surreal and all I could say was "Wow," "How cool," and "Is that you, God?" Because I have to tell you, even though I know a rotary phone would kick my kid's collective butts, there is nothing like this new XBox 360. I don't play the games, they're too difficult for my small brain (I never know which button to push), but the fact that my son here in NY can play, and talk to, my other son in Minnesota, as well as a friend in Virginia and another in Minnesota...well, it boggles the mind!

But they can play all they want, because I'll be up in my room knitting and eating my Crunchie bars. 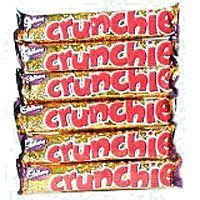