At least I'll know what to pray about...

Please allow me to introduce... 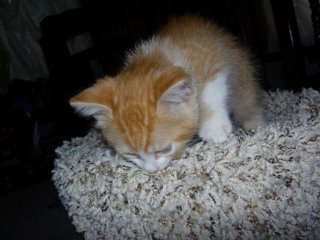 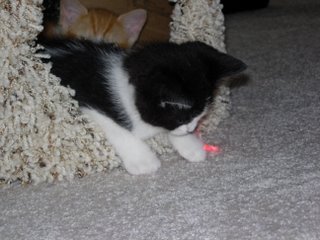 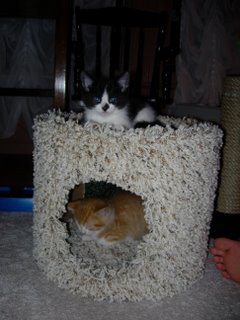 They are the cutest kittens!

The Man in Blue has got my vote

Today is the day for General Michael Hayden to face the firing squad, so to speak. I, of course, have an opinion on this matter, and for my few readers, I’ll make it a short one.

It is a very difficult world we live in, and it always has been. 9/11 was a kind of wake up call for many, and, to quote Gomer Pyle, “Surprise, Surprise,” they became painfully aware that there are many people who just don’t like Americans! Imagine that! We, as a country, have always felt that we live a gifted life and that because we all believe our country to be the best, all other countries must feel the same way. After 9/11, it seems that many Americans longed for the idyllic days of the Cold War when we knew our enemy and they had a face. We could understand the manner in which the Soviets operated, because their machinations and motivations were similar to ours. With enemies from the Middle East, we don’t quite understand their motivation, because our religion, and by this I mean Protestantism (refer to William James’ lectures and also Max Weber) which helped to build our country, is not the movement that binds us; theirs binds them and is so ingrained in their culture that it is their divine right to wage war against their enemies. Without digressing into a deeper theological discussion, I can sufficiently say that our country that has embraced other issues and made them more important than the ties that bind us together – Nationalism. There is a point that is attempting to be made here, found in this Washington Post article:

The liberal group Americans United is running an ad on cable television stations that criticizes the programs and urges viewers to "tell the president to go after the terrorists, not innocent Americans."

You tell me if, just by looking at someone if you can tell the difference between the innocent Americans and the terrorists. This shibboleth of “freedom for all” needs to be reexamined, because the terrorists who high jacked the planes on 9/11 lived in communities and adopted the tone of “innocent American”, all the while plotting against the country in which they had sought temporary residence. This has all been said before, but it is points such as these that will cause some to doubt, or deny, their support of someone who they supported previously. Or, as the Post reports, “…recent revelations about the nature of Hayden's highly classified world -- in the Air Force, at the NSA and most recently in the office of the director of national intelligence -- are forcing lawmakers to reexamine a man many of them have known for years.”

I admit that I am not a close, personal friend of General Hayden’s. But I will tell you that I served with him in Germany where, as a one-star, he was the J-2. I worked in the Office of the DCINC, which made General Hayden a frequent visitor to my office. I can play at being a sycophant, but I’m not one, and even if the common opinion in an office is that someone is a stand-up kind of guy, I believe that I can make my own assessments and judge their worth. Being an enlisted Marine, the treatment by officers, especially flag officers, could be different towards me than how they treated their fellow officers. So I can say, unequivocally, that General Hayden was liked and respected by all, from the most junior airman to the most senior flag officer at that command. He is a good leader. I’m not the only one who knows this. My friend Pony, with whom I worked in the same office (and who is a retired Naval officer), said, “It really puts the politicians in perspective when they start to bash a genuinely good person to only further themselves. Most of them should go away and be replaced by others with integrity.” I’m sure if you checked with any servicemember who served with General Hayden, their answer would be the same as Pony’s. And mine.

I was excited to see General Hayden’s nomination and I hope all goes well. I can only hope that someone who I feel is a good, intelligent man makes it through these hearings and goes on to become the next Director of the CIA. My vote is for the man in blue, even though my uniform was green.
Posted by Julie at 10:07 AM No comments:

Here is an article in the New York Times that appears to be sensitive towards the military and military families. This doesn't happen very often; the New York Times is notorious for their criticism of the military, so it is nice to see them treat a difficult subject with such grace.
Perhaps I should read it again?
On another note, I was saddened to hear of the tank accident this morning. There is almost nothing worse than waking up to see this news.
And for news from my homefront. On either the evening of the 10th or the early morning hours of the 11th, someone came and stole the Marine Corps flag from the front of our house. This is the second time this has happened. The first time we called the police and they had it there in the station and returned it to us. We then fixed the flag securely to not only the pole, but permanently secured the pole into the wall brackets. Well someone apparently had to have our flag.
When DN1 called the police they came to take a report. The policeman then asked her why she thought someone had taken the flag. She told him she thought that it might be someone who was making a political statement against a Marine Corps family. My husband seems to agree with her.
I don't.
Here's what I think, and let me present my theory in an organized manner:

I don't believe that it was a political statement; I think that flag will be hanging on the dorm room of some college student next semester. Perhaps it will change a life.

Can we institute sell-by dates?

And apparently I did not ever fit the criteria for maternity, according to this paragraph:

"She came here with her husband, the couple love each other, she is very slim, blonde and in perfect condition, she fits all the criteria for maternity." (italics are mine)

By the power vested in me…

I overheard a very interesting conversation yesterday in which a doctor discussed how he tries to teach patients (kids) the difference between power and authority. As in, sometimes you have the power to do something, like shoot someone, but not the authority. It was quite enlightening, and this morning on my drive in I thought about the comments made about the TC post yesterday, here on my blog and also on “The Washington Post” blog. And then I got to thinking about TC having the power to rename Katie, proclaiming to the world that she will henceforth be known as Kate.

There is a lot of power in naming someone. By renaming an adult you essentially accomplish three goals: first, you establish yourself as the god-like being that has complete control over their life; second, you begin to reform and mold this person into the image of your choosing; and third, you eradicate their parental influence and import. This is why cults believe in renaming their conscripts/followers, because then they establish themselves as the master, as someone who has power over the individual.

The argument comes when discussing whether or not someone then has the authority to rename an individual. It would be easy to set up moral boundaries but these are often readily cast aside, especially at the beginning of a new and exciting relationship, and this action is often based upon emotion and not reason. Legally, one has the authority to rename their self, but should it be correct to have this situation controlled by someone other than themselves? As with the TC/Katie, now Kate situation, it appears that he is the voice of authority and she is viewed as filling the role of docile vessel.

Will their relationship last? It doesn’t seem likely, especially considering the strong influence her family continues to attempt to exert over her life. Will she keep the baby if they separate? I wouldn’t put money on it. You never see pictures of Nicole Kidman with the children she adopted with TC. I know that Katie, now Kate, entered into this relationship knowing her beau’s history and because of that many people will excuse her decision as that of a grown-up woman who made her bed and now literally has to lie in it. And granted, what has been changed is the derivative of her given name by which she calls herself, not the actual birth name. Even so, it is sad is that for whatever reason, whether emotional or monetary, she has ceded her personal authority to someone else and he now has power over her. Now, remind me again, please, of the definition of mental/emotional abuse.
Posted by Julie at 9:41 AM 1 comment:

What we're not watching

I read a lot of blogs, some are about knitting, and some are about celebrities. So sue me - I like to look at the pictures. There is an interesting piece about Tom Cruise on the Celebritology blog by Liz Kelly located at "The Washington Post." I do not like Tom Cruise or his movies. Granted, I did like “Risky Business” – who didn’t – but lately he has become a bit overzealous with his attempts to persuade the public that his way is the best, and only, way to live your life and that everyone else is an uneducated idiot. Yeah, okay. Anyway, because I do not like what he stands for or how he acts, I have taken action in the best way possible – I do not go to see his movies. That’s right; I will not knowingly put money in his pocket. “War of the Worlds”? Nope – preferred the “Scary Movie 4” take on it. “Eyes Wide Shut”? Nope, thought he appeared to be a bit disingenuous about everything, from the movie to the publicity for the movie. I could keep going but I think you get the idea.

Interestingly enough I am not the only person who is boycotting Tom Cruise movies. The poll at "The Washington Post" blog asks two questions: one, do you plan on going to see “Mission: Impossible III”; two, if you answered no, why not. There are a lot of people out on the internet right now, so the numbers continue to rise, and the public is not in favor of seeing this movie. Go check it out. (It’s the entry on 5/2 at 10:43 – you may have to scroll to get there). She compares him to Howard Hughes. How funny.

This is one movie I will not be going to see this weekend. I'd rather go see "Hoot" instead.
Posted by Julie at 2:10 PM 3 comments: