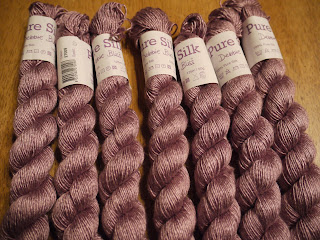 Straight from Canada.
Do we get them for the chocolate, or for the toy inside? 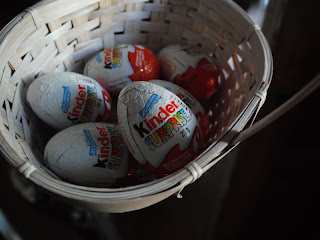 As if I don't have enough to keep me busy, I had to buy a new toy.
It was a great deal, and I thought, why not.
Really. Why not.
Don't try to talk me out of it because it came in the mail today.
I don't quite know when exactly I'll get around to using it.
You see, it has a lot of directions.
I'm not good with directions.
When I read them my mind wanders off, and I just can't concentrate.
Most things in life need directions.
Heck, knitting needs directions!
I guess I am a visual learner, and I can do much better when someone is showing me than through reading how to do it.
Now that doesn't mean I'm naturally intuitive. To the contrary, I couldn't wire an electrical circuit to save my life (directions or no directions), but after trying and failing, and trying and failing, I'll eventually catch on.
About 10 years later.
That's what I hate about those people who learn to knit one year and then the next year their patterns are published in Knitty.
And they brag!
Arrrgh.
I hate that.
That will never be me.
But I persist - I am nothing if not tenacious (a tenacious B to be honest).
So here it is, something new to boggle my poor little brain: 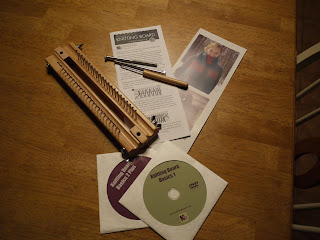 I couldn't beat the price.
HSN is selling the 10" knitting board kit for $20 or something like that, and it includes 2 instructional DVDs, and a pattern.
And the hook.
And those two long screws which I'm not sure what they're for, but someone in the house will figure it out.
For now, however, I'll put it aside and continue working on my sock which I did while we watched The Blind Side.
Has anyone seen that movie?
It was good, Sandra Bullock was good, don't know if she was Academy Award good, but that little kid who played SJ, now he deserved an Oscar.
And now back to more sock knitting.
Posted by Julie at 9:07 PM 1 comment:

Is it too late to knit socks for winter?

Or maybe it's too early?
The weather was agreeable this weekend, but Sunday while sunny was still very cool.
I finished a sock on Saturday morning.
Check it out, it's quite cute: 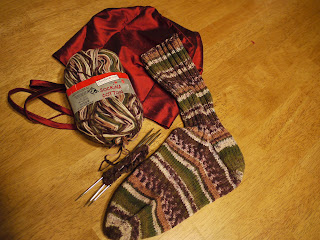 Yarn is Schoeller and Stahl Sockina Cotton Summer Dream in Forest.
I really like the colors, that's what drew me to the yarn, but knitting socks on size 2's doesn't move very quickly.
I don't want to say that I became afflicted with SSS, but I did consider other socks to knit instead of starting the second one.
How did I beat SSS?
I cast on for the second sock, but then I cast on for a different pair as well.
This time the satisfaction is a bit more immediate.
Of course it would help if I didn't have such huge feet.
That makes knitting socks take a really long time.
And seriously, look at the difference between an 8 and a 3 (or is it a 2?): 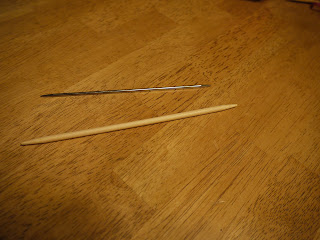 I should be knitting socks for the baby across the street, she has tiny feet for an 18 month old.
Oh well, I'll stick with these new socks on size 8's, Lion Wool in rose: 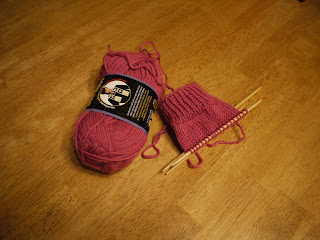 DH said that he thinks they'll be itchy.
I can't say I disagree, but I think they'll be great in winter (or those cold fall/spring days) with a pair of boots.
A small consolation would be to wear a pair of white socks underneath.
Either way, I don't think I'll get much wear out of this pair right away.
They'll be ready for fall 2010.
So no, I don't think it's too early to knit socks for next winter.
After all, in New York State we only have two seasons: winter and construction, and I think winter is just about over, don't you?
Posted by Julie at 6:25 PM 1 comment:

It was even verboten for Miss Marple

For my knitting friends who agree that one should not knit during jury duty, here is a clip for you.
Watch for Miss Marple being taken to task by a judge at around the 30 second mark:

If you watch the entire film just before this particular clip you'd hear the judge say that he can't concentrate while she's knitting, and she tells him, well I can only concentrate when I'm knitting.
Posted by Julie at 12:33 PM 1 comment:

Tell me please, exactly when is it inappropriate to knit in public?

Tomorrow at work I'm going to watch a documentary by one of the professors.
It's not a happy film.
Really nothing about lynching is a happy topic.
But you know, sitting in a classroom-cum-theatre*, and watching something - even as unpalatable a topic as lynching - gets my hands fidgety.
I'd like to bring my knitting.
After all, one of my WIPs is a prayer shawl.
Do you think people would find it inappropriate?
I mean, it's not like we'll be munching on popcorn during the film.

My glasses are rose colored, thank you very much

This is how I will remember Corey Haim.

The Parent Trap, the version with Hayley Mills, is one of my favorite movies.
It was on TCM tonight, so I watched it.
I've seen it dozens of times, literally.
I actually own a copy of the DVD, so to watch it on TV almost seems like a waste of time.
Almost.
Every time I see this movie, however, it never ceases to amaze me that parents would split up their daughters - twins no less - and then never tell them about each other.
How screwed up is that?

Who wants more snow?
I do.
Totally.
You can keep this sunshine, forget about Daylight Savings Time ending, and tell the crocuses to go back to sleep - bring me a blizzard.
This year the East Coast has seen record levels of snow, and the federal government was shut down for about 80 days, or so it seemed, but not here in my neck of the woods.
Big snow like they got in Virginia and other places which are technically the South is enough for people to complain and Panic!, but up here work/school/shopping goes on.
We're of much heartier stock (plus our higher taxes pay for guys to plow the roads 24 hours a day, and when they're done they plow the sidewalks).
I was shocked today when I realized that Daylight Savings Time ends on Sunday.
Does anyone else hate losing that hour as much as me?
And the extra light is great, but this year I really want another good snowstorm.
Just one more.
I'd even settle for temps in the 20s.
Want to know why?
Because these came in the mail today from Caroline: 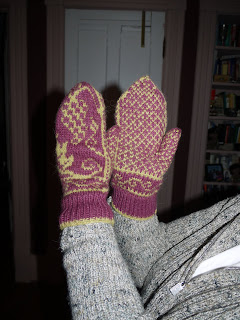 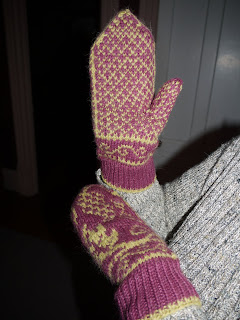 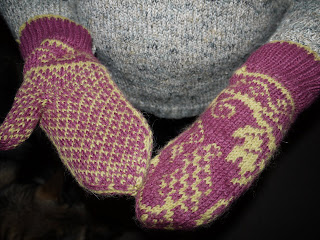 When I opened the package all I could say was, "Wow."
And then I said it again.
One more time.
I'm still in awe.
What a wonderful gift, and you know me, the ADD knitter who especially has a problem with thumbs on mittens, I would never ever begin to knit these beautiful mittens.
And colors?
Couldn't do it.
But Caroline can.
The mittens are called Ice Wine, and sometime I'll have to tell you why that is significant between the two of us, but that's a story for another blog post.
Tonight, however, I'll be wearing my pajamas inside out, flushing ice down the toilet, and sleeping with a spoon under my pillow.
Snow day - bring it on.
I have new mittens to wear.
Posted by Julie at 6:58 PM 1 comment:

I really should have called in sick

March 2nd should have been a sick day.
I never call in sick.
Sounds like hyperbole, but it's true.
I was raised to believe that if you're sick you go to work; if you're too sick to go to work, you go anyway and prove that you can't continue.
Silly, I know, but who wants to be a sick bay commando?
But on March 2nd I was tempted to call in and stay home because I had bought a new book.
Stop the presses - breaking news, right, I know.
But this wasn't just any book - this was Rachael Herron's just-published book, How to Knit a Love Song.
Anyone who reads Rachael's blog, Yarn-A-Go-Go knows what this means - another blogger has struck gold.
She is now officially a published author.
Draft a new CV please.
On March 2nd, however, I was interested to see how well she did, and I certainly wasn't disappointed.
The book engaged me from the start; the writing is fresh and natural, and the characters are real.
Some knitting books are so focused on showing how cool they are that they conspicuously drop the names of knitting celebs and their blogs into the narrative, but Rachael doesn't have that problem.
Abigail, the protagonist, is likeable without being overly cloying, and Cade, well, if he comes to life please give him my number.
Not only is her writing refreshing, but even though she could name drop, Rachael really doesn't do that. She pays subtle homage to important knitting figures, but really just writes a damn good story.
Do you get now why I wanted to stay home and read?
I ordered the book for my Kindle (why yes, I have a Kindle) at 5:00 in the morning and started reading.
I read up until I had to get ready for work, and then I read a chapter while sitting in my car just before going into work.
I was hooked.
And when I finished I almost sent Rachael an email and DEMANDED a sequel.
I highly recommend this book, and it is worth a second read, especially to get the advice from EC headlining the intro to each chapter.
Who is EC?
I'm not going to give anything away.
Read the book yourself and find out.
Many congrats to Rachael!
Posted by Julie at 7:36 PM 3 comments: