Will Work for Yarn

My friend, Jean (she's the nice one in her family, so she says), e-mailed me earlier this week and said that she was looking at the baby knits and wondered if I could make something for her.
Not for her, specifically, but to give as a gift.
What she really asked was what would I charge her to make something.
I told her that I wouldn't charge her anything, but she could pick up the cost of the yarn, and I don't like the cheap stuff.
She's good with that (remember, she's the nice one), so we've agreed on a baby boy something for now, and something else for a baby girl for later - even Christmas.
Jean, being so nice, has much more confidence in my knitting abilities than I do.
While I've seen tons of nice things for baby knits, I don't want to overestimate my ability to finish something, especially since Jean's other specification was that it should "wow" the recipients when they open the package.
So here's what I'm thinking:
For the baby boy, the Baby Partridge Vest. While the pattern is simple, and shouldn't take too long, I think the yarn really makes the difference in this vest. The pattern calls for Schaefer Yarn - Chris, and their shop sample was knit using the Patsy Mink colorway. Even though the color is one of the Memorable Women colors, and it's for a boy, I think it is a lovely, autumn color although quite frankly I certainly hope to finish the vest well before the leaves begin to turn. I think a vest would be nice too because it covers the chest, and is a great transition piece into the cooler days of fall.
Go with me on this.
I hope that there's some of the yarn left after knitting because I would love either booties or a hat to go with this vest, and once I get the yarn I'll go shop and find a complementary solid color for the other project(s). I'm really loving these - Saartje's Booties - but we'll see.
In the meantime the great closet purge continues.
Last weekend I took so much stuff to Goodwill that I filled up one of their giant rolling carts.
I also took some broken kitchen appliances to SunnKing for recycling. The guy at the retail store was so nice that he helped me carry stuff inside. Who does that? Amazing.
Friday night I went through my linen cupboard and now have two stuffed garbage bags of bed linens that I don't want/need and that will be donated.
Surprisingly the linen cupboard's door closes now.
Yea me!
Soon I'll get around to tackling the attic.
If it's been sitting up there for six years with no movement, chances are we don't need it anymore.

Hope everyone had a great day!

We went to the movies this past Saturday.
Hubby really wanted to see Prometheus - he's a big Alien(s) fan - and he's been anxiously awaiting this film's release.
So in concession to his wish to see this film, I said, "Let's go."
And we did.
Well since my baby knitting was in a state of finishing, and you can't take this with you and screw it up in a theatre especially when knitting with greasy buttered popcorn fingers in the dark, I needed a new project.
I grabbed a skein of Bernat Denimstyle that has been in my stash for a few years (like about 8 to be exact), and which has been desperately longing to be made into a sock, my size 7 DPs, and off we went to the mall.
Hubby drove so I could cast on.
I started the K2P2 ribbing, and then continued in the theatre since we got there early enough to still have light. For some reason, I should have cast on 2 more stitches, or 2 less, because my ribbing was screwy.
The hell with it, I thought, these socks are for the winter anyway, and no one is going to see the top.
Then - THEN - just before the movie was going to start I realized that somehow I had screwed up the ribbing. My K2P2 had become P2K2 and was not aligned.
Rip it out, or keep knitting?
The hell with it was my decision, again, and I just started knitting.
The bottom line is that my ribbing is probably only an inch instead of two, the socks won't stay up, but hey, I'm using up stash yarn, right?
It's all good.
So the movie starts, and I am knitting stockinette.
And knitting.
And knitting.
Let me interject here and tell you that I wasn't really thrilled about seeing this movie.
SciFi is kind of not my "thing," but I was willing to go along anyway.
With my knitting in hand, I could handle anything.
At least that's how I had it figured.
Plus there's always popcorn.
Well the movie was good.
And then it was gross.
And I kept knitting.
And then the gross things started happening, and I had to keep knitting faster and faster - and especially fast when things were really, really gross.
I'm a bit squeamish about certain things like aliens inside people, etc.
What was the end result?


Sunday night after wrapping up the baby stuff I knit the heel flap as I watched Queen- The Making of a Night at the Opera, picked up and knit stitches, and now I'm ready to decrease the gusset and then on to the foot. 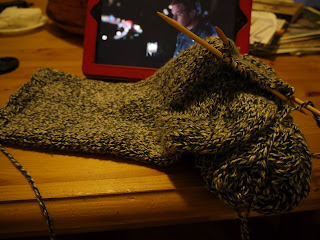 Since the little girl is going to be swimming at least three nights a week this summer, I also foresee me logging in some pool hours.
Not that I'll be doing anything there but getting bleacher butt and knitting for two uninterrupted hours.
Oh, how I suffer for my craft.
Posted by Julie at 7:56 PM No comments:

Sticking to the Simple Stuff

I recharged the camera battery, and took a few more pictures of my baby stuff before hubby takes it into work. 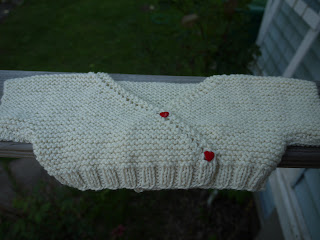 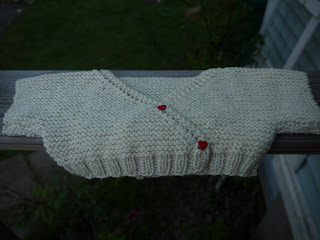 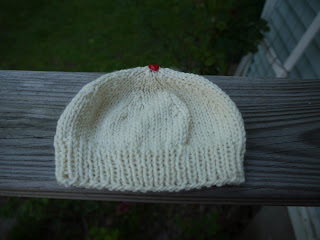 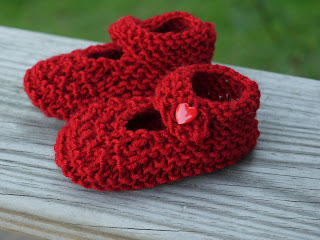 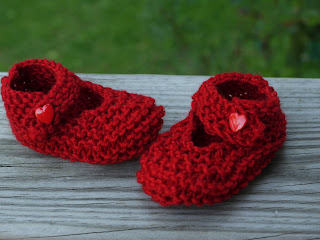 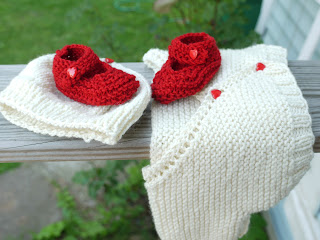 Okay, so I went a little crazy with the pictures. What can I say, I think the outfit is pretty cute.
Funny thing is, hubby really doesn't know this lady well. Well he knows her, but I don't know her at all. She works in the cafeteria where he works, but you know sometimes you just go overboard. Maybe I just needed a great excuse to make some cute baby stuff.
Well here it is!
The lady (because I don't know her name) is due on July 16th or something like that, but she is not working after this week.
Or something like that.
I'm fuzzy on the details.
All I know is that when I said I had to stop at Joann's to get buttons yesterday, hubby didn't complain.
These patterns came from the book Vintage Knits for Modern Babies.
I liked the book so much that I sent a copy to my friend, the new grandmother, for Christmas.
Not sure if she's knit anything from it, but I can tell you that I've had mine for a few years and this is the first time I've made anything.
Sad, but true.
The patterns are really cute, and they list skill levels commensurate with the stitch requirements of the pattern, but beyond that the directions are a bit vague. Or maybe it's just me.
For example, the ruby slippers (because that's what they're called) tell you to M1.
Well since it didn't tell me which M1 to do, I did the wrong one, and ripped them out, then went with a KFB for the increase. On booties this small, the other M1 I did (which was really a M1R) left a big holey gap.
So I figured out the patterns, even with the vague directions, and I think they came out okay.
The hat is printed as being knit flat and then seamed up, but I thought, why would I want to put a seam on a baby hat. Their tender little head is going to be lying flat, and the last thing you want is some seam - even if the yarn is the scrumptiously soft Rowan Cashsoft DK. I know that with chemo caps they specifically ask that there not be a seam because the head can be so tender from the chemo or radiation treatments, so wouldn't the same principle sort of apply for a baby hat? So I modified the pattern and knit it in the round, mostly during my daughter's band concert. It was pretty dang simple.
They're certainly not perfect, but seriously, the baby is being born in July, so even a little half sweater like this won't be used for very long before she outgrows it.
The nice thing is that I have a lot of the Debbie Bliss Baby Cashmerino left since the two slippers don't take much yarn, and I might just have to make some more.
Well and of course I over-ordered yarn, just in case.
So I guess I must knit more.
But now I've got to fix my Multnomah shawl, which is why I labeled this post sticking to the simple stuff because some of that bigger counting - well anything over 20 (which would be fingers and toes) kicks my butt and now my stitch count is so desperately off that I'm going to have to rip.
Ugh.
Wish me luck!

I finally finished a project.
Yea!
This should not have taken this long, but procrastinator am I.
The battery on the camera died, so I was only able to get one picture taken.
Here's a quick peek, and then I'll show more later. 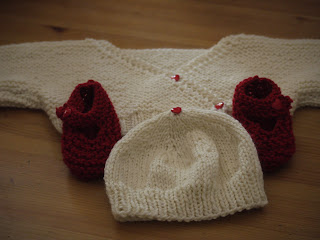